With China’s massive urbanization process showing no sign of abating, there emerges the space and need to investigate alternative and innovative approaches to architecture, design and related industrial production.

“Anti-tectonics” is a long term initiative that pursues the research and implementation of innovative technologies and methodologies in the architecture and urban planning fields. Led by architects Giannantonio Bongiorno, Momo Andrea Destro, Eugenia Murialdo the program has been launched during Beijing Design Week 2013.

Every two weeks, China builds a Rome. With an astonishing 2 billion m2 of floor area built every year, China is breaking every possible record and disrupting the paradigm we have become accustomed to in the past centuries. Although in other countries most of these numbers would lead to the explosion of a real-estate bubble, the demographic dynamics of the Middle Kingdom will possibly see a different end. 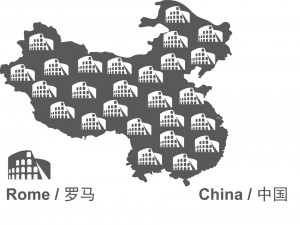 It is forecasted that by 2030/2035, 70% of the Chinese population  will live in urban conditions (from today’s 50%), with the consequent creation of new urban bodies and migrations from rural territories to the existing and new cities and other urban territories. This implies the planning and construction of new buildings and infrastructures.  The consumption of construction material is therefore staggering: The curtain wall industry gross output in China rose from 13 billion RMB (15% of the global output) in 2006 to 38 billion RMB in the 2012 (25% of the global output) . The annual crude steel production in China grew from 128 Bt/yr in 2000 to 637 Bt/yr in 2010. In comparison, the steel output in the EU dropped from 193 Bt/yr to 172 Bt/yr while the world output rose from 850 Bt/yr to 1.430 Bt/yr over the same period. The outlook for China in 2016 is an annual production of almost 1.000 Bt/yr.  If in 2003, China was consuming 688 Mt/yr of concrete (43% of global consumption), it is forecast to reach 1836 Mt/yr in 2020 (60% of global consumption). These figures indicate that there is need and, therefore, an opportunity to adopt innovative materials and technologies to re-balance the indicators for a more sustainable development.

Anti-tectonics pursues the research and implementation of innovative technologies and methodologies in the architecture and urban planning fields.

The computer that accompanied the first man to the moon was 5 times bigger than a current smartphone, but you will need 1000 of them to reach the calculating power of an Iphone. When comparing the section of the Johnson Wax Tower of Frank Lloyd Wright, a masterpiece office tower finished in 1944, with the section of any general office tower today in Beijing, the hidden or inaccessible space dedicated to mechanical equipment has increased over years and can now represent up to 25% of the total volume of a room. A half-century of technology has resulted in constricting the space used by people.

The volume between the false ceiling and the slab is completely dedicated to mechanical equipment. How much space could be recovered if the amount of mechanical equipment could be reduced using innovative materials for construction? Although the machinery has undergone an important development and is more and more efficient in terms of cost and energy, the current architectural approach of simply hiding the equipment behind a false ceiling has strangled possible innovative approaches to rethinking the interior space.

In the 1970’s the Centre Pompidou revolutionized the traditional layout of a building by moving all the equipment to the outside, creating new possibilities for the exhibition space. The Centre Pompidou façade used the technology of that time for creating a new space definition and new possible uses. Nowadays, 40 years after the Centre Pompidou was built, after many technological revolutions, its grand pipes and conduits may look over dimensioned and obsolete, but its approach to technology is still provocative. The next step would be to integrate the technology into the envelope of the building instead of simply exposing it. Innovative technology could replace the big ductwork that characterized the museum façade and new materials could create a new sophisticated and communicative body.

If this process could reduce the space needed for the equipment by only 50%, the height of an office tower could be reduced by 20% or, with the same height, the total floor area could be increased by 20%. In China, this approach would save 4 trillion tons of concrete per year over the next 20 years, that equals to 3333 pyramids of Giza.

From the end of the 1970′s, major technological revolutions imposed important changes in the sphere of interpersonal communication, media, and data. At the same time, major social and economic transitions have led towards a world integrated economy often defined by a liberalistic approach.The influence of this economic and cultural transformation in architecture is extremely visible. The investment needed to make a city shifted from public (state) to private funds and interests. This alteration has been so effective that it is natural to wonder who actually owns the city. Does the public space still exist or does it only remain as a surrogate land of no one?

The diffuse system of interpersonal devices is drastically changing the way we communicate and relate to each other as well as the way we use physical spaces. Data flow management and control has become a vital issue. What if the space would start to be influenced by this communication revolution and give it feedback through new innovative stimulus? In this communication age, networks have a new value, information can be clustered by single individuals or groups. How could this influence architecture? Media facade or interaction between the space and people is an open field with great possibilities, but is technology only limited to this? The new use of networks is quickly rendering obsolete the traditional way of conceiving urbanism. How could computing process reinvent the art of design? Does a physical neighborhood have the same influence when we can access global and local online “neighborhoods”? Does the intersection of digital and physical space reorganize the way people use the city?

Before the 19th century, most materials were used by their intrinsic characteristics. Stone and brick served to create structural parts of buildings for their capacity to resist strong compression forces. When there was great availability, wood was used to create light frame structures. More expensive materials, such as marble, were applied to create a veneer decoration, which was obliged to follow the shape of the structural parts. The invention of the curtain wall system, first constructed in 1918 in San Francisco and then in China 1981, disconnected the relationship between bearing needs and façade shape. Once freed from the structural constraint, the façade simply divides the inside from the outside: a visible border that defines the exterior look of the building. If the modern spirit used this new technology to create breakthrough masterpieces such as the Bauhaus campus, the recent tendency is instead to reduce the façade design to a mere linguistic investigation. It is easy to notice that most buildings are incredibly similar when they are under construction and only the concrete structure frame is visible. The real identity of the architecture has become the image of its façade, which has to be attractive and fancy without concern with what is hiding behind. What was once a revolution in modern architecture has now become a process of make-up.

Relegating the façade only to its formal value and to the inside/outside delimitation creates buildings without life, isolated sculptures, static in their impossibility to interact with the external world. Why continue to build facades only concerned with form instead of performance? Since the envelope of the building has been freed by its structural responsibility, what if its purpose could be enhanced instead of reduced?  What if the façade, instead of being a boundary between inside and outside, would become an interpreter, a mediator between the two different environments? What if the envelope would be able to enhance communication between the people inside and those in the street?

“Have you not noticed, in walking about this city, that among the buildings with which it is peopled, certain are mute; others speak and others, finally –and they are the most rare- sing?”  Wrote once Paul Valery. What if the building’s envelop in the future would be able to listen, to interpret and to react, tuning itself to the need of the citizens in order to sing better?

The invention of reinforced concrete structure and the mechanical elevator were technological innovations that generated new unexplored possibilities. It was the sensitivity of the great modernist masters that used those new technologies to free the art of construction and discover a completely new architecture capable to respond to the needs of a modern world. Nowadays we use the technology so intimately and constantly that it is unprecedented in history. We have symbiotic relationships with devices that only ten years ago were considered science-fiction.

In spite of this, as building science, contemporary architecture is obsolete using complex models to try creating new eco-compatible buildings but based on old inefficient processes. It is time to delete obsolete principles, to get inspired by the new technology, to discover, through the latest research on material and industry science, new fundamentals that spontaneously will create a new art of sustainable construction.